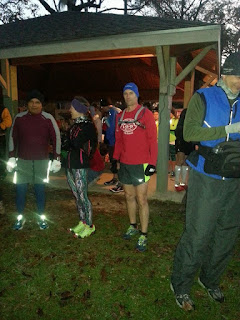 My single track mind led me on another adventure this past weekend We headed down to Louisiana for some running, swamps, alligators, great food, and lots of fun.  I looked at course elevations, you tube videos, and weather reports regularly. It was not a big race, but had some serious folks there.  The weather was absolutely beautiful with a start around 40 degrees and the sun peaking up over the horizon.  I took off a little fast as usual and realized I was running with the winner from last year, Ed Melancon, and ultra stud Kelly Agnew who has also won the race.  I went into this race with a goal around 18 hours, but had no idea what the course would be like.  They apparently put all the hills and roots in Louisiana around lake Chicot...maybe it wasn't that bad, but it was definitely tougher than I expected! It wasn't long and Ed pulled away and Kelly dropped back some leaving me to my thoughts and IPod until my wife Marcy joined me for the last 20 miles. 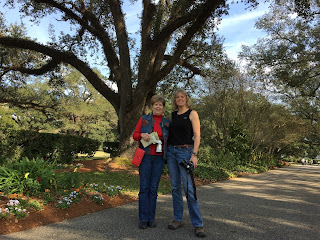 Every savage beast has a beauty or two.  My beauties kept me going lap after lap.  I had one fella tell me that they just finished changing Jeff Gordon's tires before I rolled in, and I believe it.  It's nice when your crew knows what you want before you do.  Thanks so much to Marcy and Joyce for keeping me going!  It was awesome having Marcy pace me in on the last 20 miles.  She is not super talkative, but makes up for it with slapstick physical comedy and threw herself on the ground a few times to lighten my spirit. 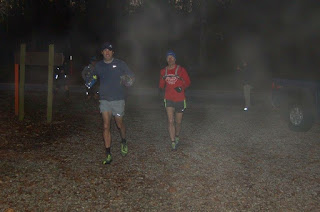 The aid stations were awesome!  Thank you all very much.  Every station was great, but station 3 really stood out.  I must say that I always had a smile on coming in and leaving.  Something about people screaming your name and cheering.  You guys rock! 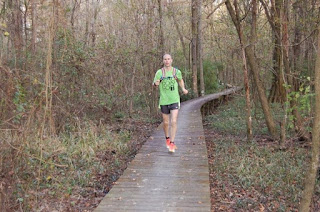 The course was a mix of hills and swamp flats.  I got a kick out of running across the bridges, especially when it got dark.  The local wildlife scurried all over the place, but none came close enough to play.  I did switch over to savage Doug and start to think about all the critters I could come back down and hunt, then I fell down and decided to keep my mind on running. I didn't have any toes rolling around loose in my shoe like Kelly, but am amazed how those Louisiana roots grow and reach up.
I ended up with a great race and even closed a little on Ed towards the end.  My splits were great and I was very happy with my time on this course.  I am very thankful that God has given me the ability and desire to come do this thing we do! 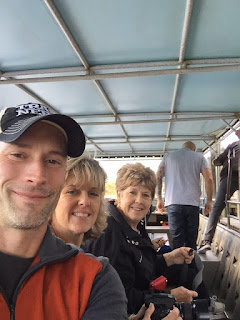 We ended up with a walk around a plantation, some time eating in the French Quarter, and a Pearl River ECO swamp tour.  I hope every runner had as great a time as I did.