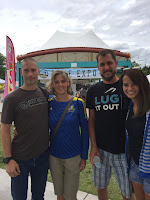 Time has gotten away from me!  It has been a few months since I even thought about writing.  It has been a fun summer.  No great feats of strength or endurance, but plenty of racing and hunting.
In July me and Marcy went to Missoula Montana to hang out with some awesome friends, run the Missoula Marathon, and see water shoot out of the earth. Thanks to Marcy I now have some awesome new flag shorts which have become a hit! The photo people at the marathon took some great pictures.  I like this one so much it is now on my wall! 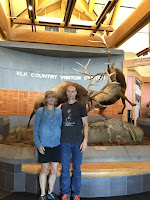 The weather was beautiful and we had a good run. I ended up with an ok time and a 2nd in age group award.  I might have gotten 1st in age group if Matt hadn't made me run up a mountain the day before the race!
You can't go to Montana without seeing Old Faithful, so we headed to Yosemite Park the next day and climbed around on trails and watched the geyser. I love the entrance quote 'For the benefit and enjoyment of the people'.  Please don't take our public lands for granted.  Stay on top of our representatives in DC to keep them public! OK, public service announcement is over. You also can't go to Missoula without a visit to the Rocky Mountain Elk Foundation. Lastly I have to say that Missoula has the coolest airport ever!  I have added another place to the 'places I could live list'. 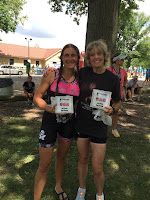 Marcy kicked butt on her first Olympic distance triathlon at the end of July. We packed up and headed to Springfield Illinois.  Marcy was nervous and stressed pre-race as usual.  We drove the course, looked at the water, and triple checked the gear. Race day came and she killed it as usual along with a couple other Cape Girardeau racers.  I was super impressed and proud of her.  She came away with a 1st place in age group award and a huge sense of accomplishment.   Those triathlon people just aren't right! Can you imagine doing crazy crap like that? 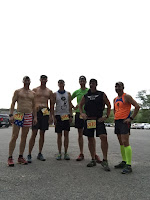 August is boys trip weekend to Kansas to run the Psycho Nights trail run.  We loaded up in 2 vehicles this year and headed to Kansas for our annual night race.  We had a vehicle against vehicle competition....that's the last we will talk about that.  The race was hot, buggy, rocky, and fun as usual.  After the race we headed to Columbia for some slushies, which is very very very important to Collin, and pizza.  The next morning was pig out at I-Hop.  I was questioned on my ability to eat a full breakfast plus a full stack of pancakes.There are no more questions on my abilities to put away food! 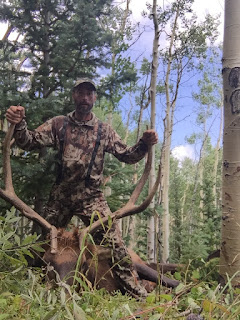 The savage came out in September.  I headed to Colorado for my annual elk hunting trip and harvested my 2nd bull elk with a bow.  It was a crazy and tough adventure which had the extra benefit of a freezer full of mountain cow!  I stalked up on this bull about 5 miles back in and at about 11,000 feet elevation.  It is definitely an adventure.  Shooting the elk is the beginning.  I shot him at 10:30 in the morning and finished packing him out at 10:30 that night.  My heaviest pack was 120 lbs! The trip was topped off by sleeping under the stars in the back country and eating trout cooked over a fire minutes after they were caught.  Life is good! God is great!

I ran the City of Roses Half Marathon a few weeks later, but did not earn any bling.  Maybe next year!  I am claiming I was tired from Colorado.


That brings us to the Ondesonk 50k this month.  Marcy and I went over to Illinois for a 2nd run of the 50k.  It was pretty sloppy this year and took a toll on both of us.  I came in 6th place and Marcy was the 2nd place female.  It was tough, but fun.  It was also marked much better this year and I didn't get lost once.  If you are looking for a fairly tough and technical 50k not far from home this one is for you.  If you look up it is also has some beautiful scenery with rock cliffs and water falls.

We are preparing for some races to come and mission trip to Guatemala.  This morning I ran 26 miles and a total of 83 miles this week. It has been a tough couple of 80 mile weeks with a race in the middle, but I made it through.  I have been in the deer woods a little also.  I have one deer processed and in the freezer and hope to harvest a few more this year in between training runs. We leave soon for a big adventure in Guatemala to put on a camp for kids at a children's home then are going to take a couple of days to hike a volcano.  The weekend after we get back both me and Marcy are running the 50 mile at Tunnel Hill in Vienna IL. The big race is coming on new years day in Arizona.  We are running the Across the Years 24 hour.