We got there a little after 6pm to unload and set up my spot. I paid some extra money for a very awesome VIP spot.  Marcy helped me strategically placed my coolers, clothes, electronics, changing tent, and nutrition.  We had cups with a concoction of Ucan, chia seed, coconut oil, and almond milk with an option of homemade chicken bone broth.


We had a few minutes after setup to chat with some friends and fellow runners from around the area and far away.  6:50PM and the lineup came very quick.  I toed the line with my usual crew, but everyone else seemed to be afraid of the start line.  Kelpe got everyone moved up and the hampsterfest began!  It was a little cold, the wind was picking up, and the clouds had moved in, but no rain yet.  The last time I checked they said 7pm was when it would hit, so I got to thinking maybe my prayers had been answered! Woo Hoo it was going to pass us by!  Well, that’s not what happened.


We started off like every other year taking off like greyhounds after the fake rabbit.  We did our usual chit chatting, joking, and catching up.  All the regular running talk about goals, training, previous races, and upcoming races.  We group up and move back and forth within groups talking to different people and catching up.  I really do love this part of the race!  Lots of quotes and one liners I wish I could remember, but never do. We all settle in to our paces and spread out.  Now it will be 12 hours of loops with this group of folks all running their own race. 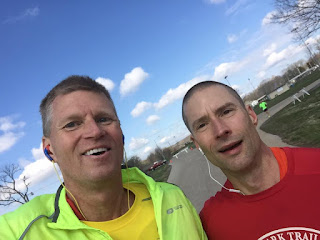 Each lap I start to learn the other racers that I will be passing and will be passing me.  It wasn’t long before it started sprinkling, but it didn’t seem so bad.  I was holding a good pace and feeling good.  The wind was much harder than it was forecasted earlier in the week and directly in our face ½ of every lap.  I knew early on this was going to be a killer.  A couple hours in the weather hit and things got real for us all.  I spent hours in rain ranging from sprinkles to hard downpours and always with those dadgum winds.  I don’t know the official wind gusts, but I do know they were at least 20mph at some points.  There were so many points I felt like quitting!  It seemed such a daunting task!  In the early hours of the morning I asked one of the volunteers, Chris Crossett, what the forecast was and he told me that it looked like it would be out by 4am.  4AM!!! Holy crap is what I was thinking!  That was many more hours of misery away.  I changed shoes and socks, but kept my wet clothes on.  My wool t-shirt and light water resistant wind jacket were working well together.  I had a coating of water resistant diaper rash cream under my shorts that seemed to be working well, so I decided to leave things as they were for now.  I noticed other runners dropping.  Several guys I really didn’t expect to drop left.  There were injuries and guys just not feeling well.  The field was dropping down, which always makes me think about why I am sticking it out.


Dawn finally came and with it was sun and dry weather.  My spirits started to pick up, but I also could feel the toll of the night’s weather.  7Am rolled around and I was 67 official miles and 68 ran miles into it.  This was 5 miles under where I expected to be at this point.  I was feeling down but not out.  I was running my bad runner math in my head.  Could I still do it?  What would my pace need to be?  Could I make that pace?  I had some confusion on whether or not the counters missed a mile or if it was the difference in tangents on the measured course and my actual ran.  It is hard during a race to work these things out in your head.  12 hours of hard running in bad weather doesn’t leave you thinking clear.  Through the day I was able to see the mile creep on each lap and clear up the issue of a missed lap.  I figured out that I was with each lap running extra.  If you are a walker you should pay attention to this.  I gained over 3 miles in 24hours going around walkers and not hitting tangents.


The current batch of 12 hour runners expelled a huge sigh of relief the turned the wind back for a moment and the new batch of 12 hour runners took off.  Several fast and highly watched racers were in this group!  I felt like kicking them all in the shin as they sprinted by me all smiles and fresh.  This is always another upturn in attitude as new friends hit the course and lift your spirits.  Matt Miller joined me for a few laps and spurred me on with humor, pork rinds, and promises of special beer at the end.


18 hours in I knew that I would only hit 130 miles at best.  The guy in second place was hurting, but still going and on my heals.  John Polihan amazed me!  He looked like he was on deaths door, but any time I walked he would lap me and like the terminator he never quit coming.  I was on the edge of quitting at this point.  My dreams of 140 crushed, my spirit broken by wind and rain, and only the same windy lap over and over to look forward to.  My beautiful bride would not let me quit.  She said let’s just walk it out a little and see what happens, then let’s run a little and see what happens, and then many laps later I was back at it and looking forward again.  Behind every good man is a better woman.  It is very true in my case.


20ish hours Joe Windeknecht and Mike Burnett joined me for some laps.  This gave me another big spirit boost which got through several more hours.  Joe is a very good friend that just never lets a guy quit.  He will always bring out the good and help you dig deep.  His persistence and positive attitude are a blessing.  Mike always cracks me up and I am very happy he chose to come back and use his talent of humor to take my mind off the difficulty I was facing.


23 hours in I called it at 118 miles official and 121 miles ran.  I was tired, cold, and had the overall cinched. It was time for a warm restroom, whatever food I could handle, and as much beer as I could handle. 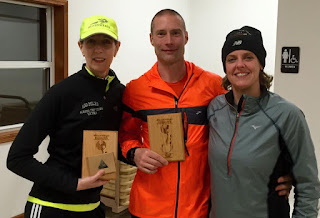 24 hours gives you a lot of time to think about why you are running an ultra.  There is no one reason I guess.  If I could bring it to one word it might be achievement, but it also might be community.  Is it personal achievement or being part of something bigger where people strive to reach new heights as part of a community supporting each other in the great adventure?  I think I might be to delirious to figure it out right now.