The Aslinger 24-hour Endurance Race is almost here!  I have been focused on this race for months and have great big hairy audacious goals. Each day it gets closer the excitement builds.  I know some folks get nervous about racing, but I absolutely love it and can’t wait. April will bring another highly anticipated experience at the Boston Marathon, but I don't have much planned after that. 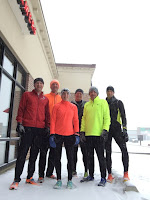 I definitely had some setbacks in my training with pretty bad shin splints after my December 100 miler, but I am getting over them and feeling pretty good. Savage Doug took a new training strategy and slowed down a bit, which has really helped my body recover and heal.  Don't get me wrong though, my running partners won't have me lazily jogging around.  Training has included pacing Marcy for 30 miles in her 100 miler the fist of January, then running with Kelpe on his birthday for over 30 miles in the snow mid-January, and several torture sessions with Laura, Joe, Andy, Scott, Gene, Steve, Tim, and Ross.   They have blessed me with hills, snow, rain, wind, and summer heat...which I think was all in one day!
The quote of the month for January is ‘you need to find some better friends!’.This is the response from the lady in the post office while Bryan and I were sitting on the floor munching on snacks, putting dry socks on our gnarly feet, and telling her that ‘no we aren’t lost or biking but running my friend Kelpe’s age for his annual birthday run’.  I think she was impressed at our endurance and unimpressed at our intelligence (shoulder shrug). I am sure she was shaking her head as we joined Stan, Mike B, Jason, and Brian J to start running in the snow towards Vienna IL and our finish.  It was a great and fun run with beautiful scenery and good conversation. 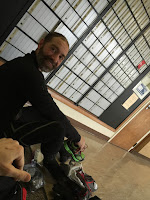 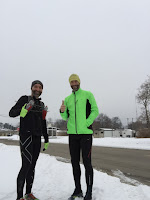 February a pretty good group went over and ran the fly with Eagles.  I was kind of slow, but won’t complain.  On the way home we stopped at Quatros Pizza and refueled.  The quote for February came from Joe ‘isn’t this crust great!’….I had eaten all the toppings and had a pile of crust on my plate. 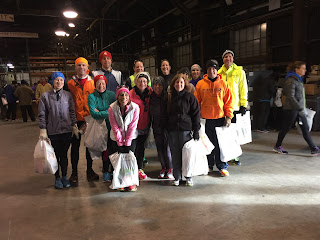 The ketogenic (fat) diet is going pretty good.  I am coming up on a year with only a few of some let’s say ups and downs.  I no longer have meltdowns at parties where I sob and people hold me back or I don’t get stopped and eat entire pans of lasagna.  The sugar and carb cravings have pretty much disappeared.   I can get up and run 20 miles at moderate intensity with no food and even go on to lunch or dinner without eating if I want.  My energy levels are great until 8pm, but then I turn into a pumpkin. I got real skinny last summer but put most of it back on.  I will be doing some more tests in April or May to check my blood and body composition.  The 100 miler in December was pretty solid proof that endurance wise I can run well on the diet.  It didn’t seem to hurt my speed at the marathon in November either, which was a concern.  My hope is that I will continue to adapt and burn fat at higher and higher intensities.


In an effort to heal up and maintain mileage I started running a lot of my training runs at a heart rate of 180 less my age.  This was pretty sucky at first, but now I am really enjoying it. It has led me to run with some friends I don’t normally run with and has been a real blessing. Sometimes running is like life, it’s amazing how much you experience when you slow down a little.  My pace at 135 beats started out at 10:00-10:30 and is now 8:45-9:30. Come on 8:00 flat!

James 1:2 Consider it pure joy, my brothers and sister, whenever you face trials of many kinds, because you know that testing your faith produces perseverance.