June 14, 2016
One month after completing the Aslinger 24 hour run it was time to go to Boston!  Time ticked away as I recovered from the 24 hour and tried to get a few weeks of last minute speed work in.  I managed a recovery week, a few good workout weeks, and the taper.  Marcy managed to get increasingly nervous about Boston, but it wouldn't be a race if Marcy wasn't fretting.  I didn't worry about anything...except the room. After some last minute excitement we finally got room confirmation and all was good.  Marcy and I joined the group, loaded the plane, and headed to Boston.
Boston was a lot of fun 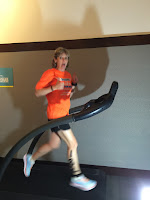 .  The people were great and we didn't have any bad experiences while there. We stayed close to the hospital and a homeless shelter, so it was a little colorful.  I am definitely a country boy, the sirens and horns would drive me crazy in short order. The group went to the expo and spent a little hard earned money, then we got to run on a treadmill as part of a study on impact that several of us took part in. It was nice to hang out with friends, eat at some cool places, and see a new city.
The night before me and Marcy went through the usual routine.  I got out my shorts and shoes.  Marcy got out different clothes, race belts, water bottles, gu's, and other assorted race paraphernalia.  I lounged and got excited about the race while she fretted and worried.
Race morning came and we all headed out to catch the buses.  Andy didn't want to be late and headed out firs

t.  I met Joe and headed out with him a little later, then the ladies headed out even later due to their coral and start time.  Joe and I got to the 'athletes village' which was grass, tents, coffee, water, and porta potties. 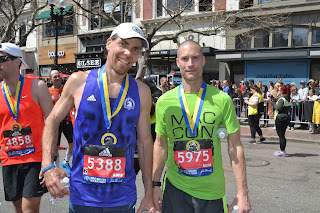 We milled around for what seemed forever, found Andy, went potty, dropped clothes, went potty, went to the corral walk, lost Joe, lost Andy, saw Joe who didn't see me, got corralled like a steer, found Andy, baked in the sun, used a strangers sun block, and took off at 10AM...whew that's a lot to go through before a race. 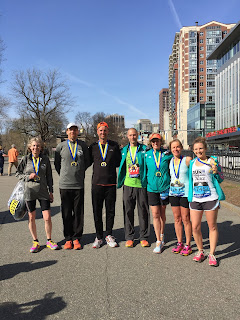 I have never been in a race with that many people and they never really thinned out.  The good thing is they were all running fast.  I was hanging with Andy and we were setting a pretty good pace starting out, but it was over 70 degrees and it would soon enough take a toll.  I had to fight in and out at the water stations and at some point lost Andy, but maintained a good pace through the first half.  It was amazing to see so many people lined up cheering. I had a hard time finding a place to throw my run gum! The second half was brutal with the heat and then the hills.  Towards the end I picked up Andy again slogging along and we finished it out.  We were both about 10+ minutes off our usual marathon time and feeling like crap.  On to the medals, pictures, bag pickup, and finding Joe.  We found Joe and fist thing he tells me is I don't look good...what's up with that? The whole group met at our predetermined location.
There was a homeless man and woman sitting on the two benches at our meeting area who shared the benches with us and chatted some.  We in turn shared some water and snacks we brought from the race finish. It was strange hanging in the park chatting with a lady about running and the fact that she used to have an elliptical machine while knowing she had no place other than a park bench to go to.   I don't imagine I will forget that moment any time soon.  How many times have I looked the other way when I could have treated people like people?
We topped it off with an awesome, and I do mean awesome, dinner.  A few of us were brave enough to try bone marrow.  Joe Windeknecht was not! I had some great beer, great food, and pretty great company.
Overall Boston was a good time and a great experience.  I'm not sure if I will get Marcy back, but peer pressure goes a long way :)