Run Under the Stars AKA Savage redemption

June 16, 2016
A year ago I decided to run the Run Under the Stars 10 hour race with Marcy and a group of runners from Cape Girardeau.  I was coming off a long series of multiple races every month and had a knee that was really starting to bother me.  In true Savage fashion I figured "why not?" and that "I can deal with anything for that long".  It didn't turn out so well and I quit at 33.5 miles and about half way.  This was my first DNF and I was in a very very very bad place.  I ended up being an extremely grouchy (my wife's opinion) crew man.  Since then I have been seeing that race in my dreams at night (for you Ray Stevens fans)!
This year was going to be different.  I have been training hard, feeling good, and on the 1 year mark of running on the ketogenic diet. I missed my 140 miles at the Aslinger 24 hour, but the weather just did not cooperate.  The savage was screaming to be let loose! I starting hitting hills and trails again to build back some strength and speed work for my foot speed.  Lots of back to back long run weekends and a few small races. 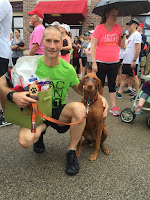 Speaking of small races, Zoey and I were signed up for our annual  Furry 5K.  She is the reigning champ and we had to make sure she kept her crown.  I was in MO Run Co the week before and Bryan Kelpe pointed out to me that there were still spots left on the contest by Carson Footwear.  If you are in the top 3 of a race where you wore Carsons you earn $250.00.  Well......I couldn't pass up the opportunity to buy some shoes in the hopes of running fast enough to get them paid for!  We ended up running 19:35 and placing 1st overall.  Zoey made out like a bandit with goodie packages.  Thanks to all the sponsors!  I should end up with a $250 check from Carson Footwear that is half spent on a pair of Carson Black Ops. 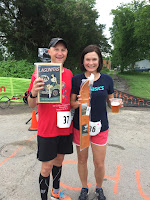 June came and so did the beer mile.  I was sooooo torn!  I wanted to race, but didn't want to mess up my fat burning right before RUTS.  I elected to watch instead of run.  I'm very happy with my decision.  It would have 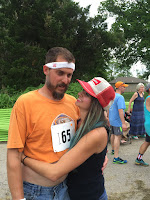 sucked to puke my guts up and get beat by  a bunch of women including my wife!  There were a few humbled fellas our there :)


My crew politely asked if she could go do a 1 mile swim race instead of going to watch me run circles.  Savage Doug of course said  "sure! I'm Doug" and got a dirty look. So on race day Marcy and I would be going different directions, and I would be crewless.
Saturday morning I did my best to sleep in...woke up at 5am and couldn't go back to sleep.  I got up at 5am and started beavering around packing and getting ready.  I had 3 eggs with a little bacon and goat cheese for breakfast. I packed up extra shoes and clothes, nutrition, canopy, table, chairs, and changing tent.  Mid morning I went to the farmers market with Marcy and thought I would take a nap when we got home...no nap would come.  I was just too wired and excited about the race.  I ate some sardines and had a fatty coffee for lunch then headed to Paducah and glory or misery, which was to be determined.
My strategy was to get there early, grab a good spot, go park in the shade, and take a nap.  I met the most awesome 72 year old ultra running woman named Carol.  We hit it off and partnered up on our set up spot then pulled over to the shade to try to find that elusive nap. I never did find that nap and finally got up at 5pm for some pork rinds and anchovies.  They really are awesome! Fuel of champions!  We were later joined by David and had a good time hanging out and chatting while we waited for the race to start. I am very grateful they befriended me for a while. 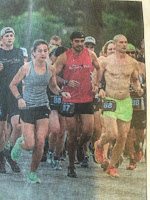 8pm rolled around fast and we were off.  There were several racers that took off fast out of the gate and held the lead ahead of me for many laps.  I didn't know names and had to come up with nicknames.  Ponytail dropped back after a few laps.  Redbeard showed no sign of slowing and the dude Olaf was somewhere.  Olaf has put down serious numbers on this race before and looking at the standings was the guy to beat.  He also is on the qualifying list for the U.S. ultra team.  I progressed through the night and was pushing hard.  Three hours in I drank a mix of Ucan and MCT which set heavy, but gave me an energy boost.  I was also starting to have some hydration concerns.  I had to spend more time fixing drinks and getting my hydration back on track.  Somewhere along the way Redbeard slowed down and Olaf passed me.  He gained several laps, but I thought he was always within catching distance.
I pushed through the night only drinking until they broke out the bacon.  I crammed down a couple pieces of bacon and a baby coke which always helps my spirits.  It was starting to lighten up and the clock had ticked down to 1 hour left.  I kicked in everything I had..and I mean everything!  I figured I could suffer most anything for an hour. My calves were cramped and knotted and I was feeling the faster pace, but managed to drop my pace down in the 7:xx's for a dozen laps and gained 2 laps back on Olaf.  I ended up with 2nd place and 64 official miles.  Steve Durbin gave a quick announcement of the top 5 and we all started slowly packing up our stuff to head back to the world.  I packed up my canopy, table, changing tent, containers, and cooler and reluctantly climbed in my truck for the 2 hour drive home. It was a great race and I am so happy I went back. Now on to Missoula MT in July!